This fruit bowl was heaven, love and bliss in a bowl. Packed with fiber, nutrition and energy; this ice cream bowl is high-carb, raw vegan, low-fat, sweet, fruity, low-fat, filling, yummy, and nutritious! Oh, make sure your bowl is big enough, because it will overflow (like mines was) if it’s a small bowl… Enjoy! 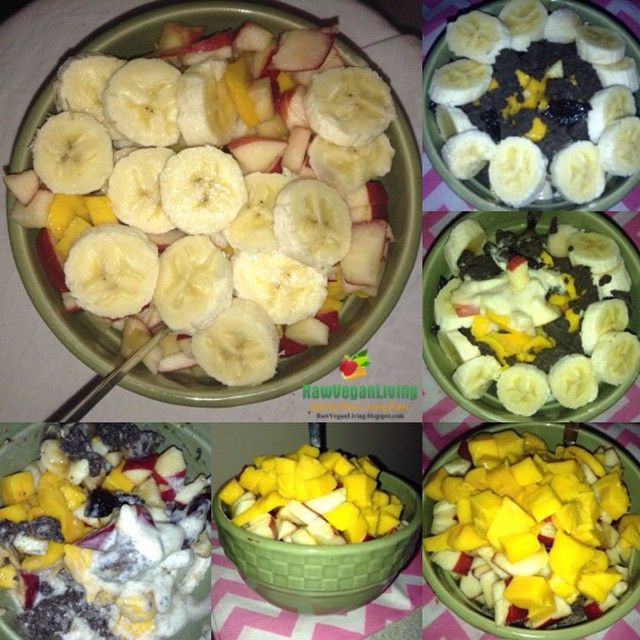 Banana Ice Cream Topped with Fruits and Buckwheat Crumbs and Crumbles Recipe
Ice Cream:
4-6 frozen bananas
Fruit Toppings:
Add whichever fruit toppings you like. Fresh blueberries, dried mulberries and cacao nibs all make great toppings!
Buckwheat Crumbs and Crumbles
Directions
To make the Buckwheat Crumbles and Crumbs: process all ingredients in a food processor until a sticky and crumbly consistency. Pour into a bowl and set aside while you make the ice cream.
To make the Ice Cream: blend the bananas in a high-speed blender until a creamy and smooth consistency. Serve the ice cream in a bowl and add in the buckwheat crumbs and crumbles, and your desired fruit toppings. Enjoy!
If you follow me on Instagram, you may have seen my recipe teaser posts. I’ve been teasing you by showing you pictures of the recipes that will be featured in my upcoming desserts ebook. My ebook is projected to launch in early May. I can’t hardly wait for all of you to see the book; it’s going to be amazing.
Below is the latest recipe teaser I posted on Instagram. It’s plain banana ice cream topped with a coconut superfood crumbs, dried mulberries and coconut nectar. Super delicious and nutritious! Who’s excited for my ebook to launch?!