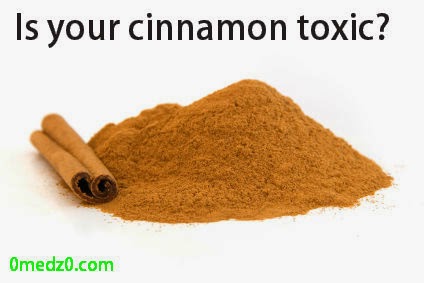 Cinnamon is a traditional, popular spice that has been used for centuries for food and medicinal purposes, as well as for home remedies (repel ants with cinnamon!). I believe it’s a must-have spice to have in your kitchen at all times. It provides amazing health benefits (short list of benefits listed below), however, not all cinnamon is healthy. Just because its ‘cinnamon’ doesn’t mean it’s healthy and the right cinnamon variety. What you may not know about your favorite spice is, it has an evil cousin and it could be one of the many causes to your health problems.
Is Your Cinnamon Genuine?
There are multiple different varieties of cinnamon, but the two commonly used varieties are cassia (a.k.a “saigon”) and ceylon. The difference between the two are: one is real and one is fake. Do you know which one is real and which one is fake? Which one are you using? If your cinnamon is just labeled, “cinnamon”, chances are, it’s fake cinnamon. 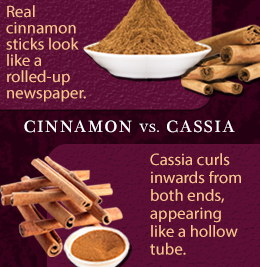 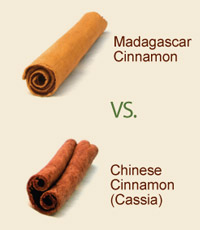 The cinnamon that you normally see sold in every supermarket’s spice section is, cassia cinnamon—the “false/fake cinnamon” (cassia cinnamon is cheaper than ceylon, as ceylon cinnamon). Cassia cinnamon is relative to ceylon (cassia is known as ceylon’s cousin), and both varieties are taken from the inner bark of the Cinnamomum tree. Cassia cinnamon is darker in color and it has a very strong/bitter flavor, unlike ceylon, that has a sweet flavor and lighter in color. When you’re shopping for cinnamon sticks, look for the light-colored and sweet aroma sticks; it’s ceylon.
Does It Matter Which Cinnamon I Use?
Yes, it matters! If you don’t think buying cassia cinnamon makes much of a difference, think again! If you think you’re eating healthy when you sprinkle cinnamon on your cookies, breads, cereals, brownies, and other sweet treats—you’ve been duped, because the fake cinnamon is sure NOT healthy.
The different cinnamon varieties can have an major impact on your health. Cassia cinnamon is quite toxic, as it’s one of the largest sources of coumadin. Coumadin is a toxic substance that’s toxic to the liver and kidneys, and is a carcinogen that causes cancerous tumors in humans. So, the cinnamon that you normally buy at your regular supermarket may be giving you cancer. Ceylon cinnamon on the other hand, does not contain coumadin. When buying products that contain cinnamon, make sure the company wasn’t using fake cinnamon, as that can be hazardous.
Health Benefits of Cinnamon (ceylon cinnamon that is):
Cinnamon provides an array of powerful benefits, however, to reap all its benefits, make sure you buy the real cinnamon. See for yourself below.
Check out my banana cinnamon smoothie recipe here!
RESOURCES:
Hope this post has helped you! Please share with everyone you know, especially cinnamon lovers! 🙂
If you buy the fake cinnamon, do you plan to switch to the real cinnamon? Are you dashing sprinkles of cinnamon on your food? What are your thoughts about this topic? ‘Natural’ doesn’t make it safe. Choose ceylon cinnamon the next time you’re cinnamon shopping.